Many exceptional women have passed through Hamwood’s doors. The following are but a few and some may be omitted through lack of information. 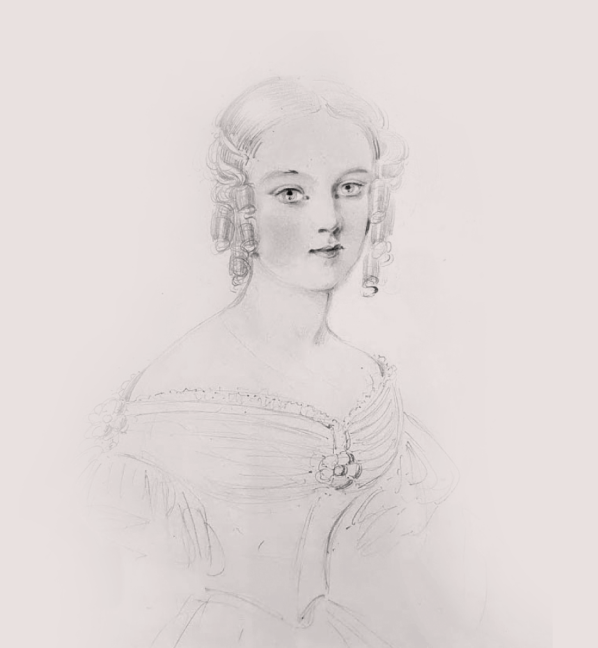 Marianne-Caroline Hamilton, nee Tighe, was born on the same year as Hamwood was built, 1777. She married Charles II Hamilton of Hamwood in 1801 and they had six children. She was chiefly responsible for decorating and furnishing the house in the style of the time. She came from a fine house in Wicklow called Rosanna and her grandparents were Sir William and Lady Elizabeth Fowndes owners of Woodstock from where the Ladies of Llangollen made their escape to a life together in North Wales causing a certain amount of uproar at the time. Woodstock was burnt to the ground in 1922 by rebels.

Caroline spent much of her younger years in London and took lessons in art from the notable John Spilsbury at Harrow where her brother was at school, and later Maria his daughter. In 1795 a few years before the Irish Rebellion of 1798 her family moved to Ireland permanently. She became a skilled artist especially in pencil drawings of Irish society of the day using a satirist angle on such subjects as religion, education and the ruling classes.

After rearing as well as educating her six children Caroline dedicated her time to the improvement and development of Hamwood house and its gardens, her art and in particular her writing. Her memoirs are one of the most significant records of Irish life of the time, and in addition she became heir to the diaries of the Ladies of Llangollen through her cousin Sarah Ponsonby, which later were published in the Hamwood Papers held in the National Library, Dublin. Caroline’s cousin Mary Tighe was an accomplished poet best known for her poem Psyche.

Her artistic talent and to some extent that of her son Charles III passed down to her great grand children Eva and Letitia. 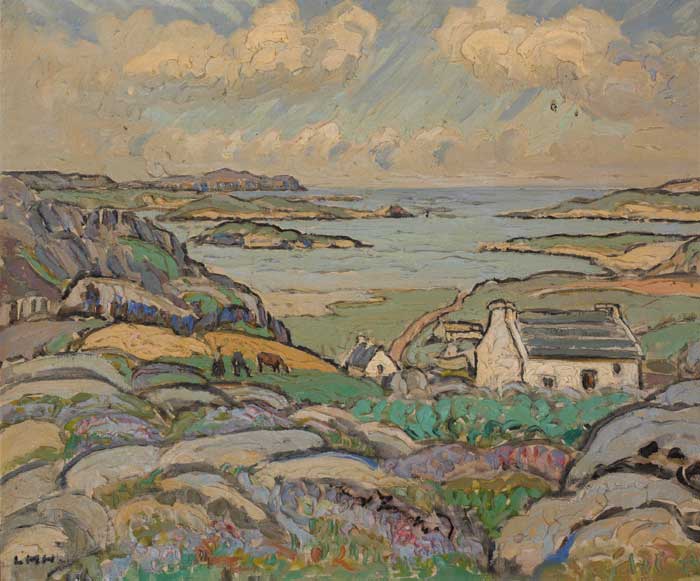 Eva Henrietta Hamilton (1876-1960) was born and reared at Hamwood, as was her sister, Letitia. One of five sisters and two brothers, only one sister, Lily, got married, with Eva and Letitia becoming established artists. Both fought for recognition in a society where art was considered as a male preserve and women artists were not treated as equals. Eva was an exceptional portrait artist having studied under Sir William Orpen ( 1878-1931) at the Dublin Metropolitan School of Art (DMSA) which she entered in 1907 at the age of 31 and later, under Henry Tonks, at the Slade in London. Many of her portraits were commissioned by members of her extended family and their social circle. Normally painted against a simple background, Eva’s skill was in reading the character of her sitters and transferring that on to her canvas. With the coming of independence in Ireland in 1922, the market for these type of portraits was much reduced and Eva switched her attention to landscapes which, although not particularly innovative in their production, were attractive and well observed.

Eva was the first of the sisters to exhibit her work, showing a portrait and a figure subject in 1898 at the annual exhibition of the Water Colour Society of Ireland (WCSI). Watercolours were then seen as an acceptable medium for women artists. Her works were shown in London, Paris and Brussels as well as the Irish International Exhibition in Dublin in 1907. She first exhibited at the Royal Hibernian Academy (RHA) in Dublin in 1904 where she continued to exhibit until 1945.

With the death of their mother in 1922, Eva assumed much of the housekeeping role and had less time to devote to her painting. The sisters lived together for most of their lives, in their later years in a series of large rented houses. Among these was Fonthill in Palmerstown, now the offices of the Ballymore construction company. In 1946, they made their final move to Woodville in Lucan, an eighteenth century house designed by the architect, Richard Castle (1690-1751). Fondly known as ‘the Aunts’ nest’ they continued to give memorable parties in their rather eccentric lifestyles. A tree with many sweeping branches stood in the garden from where old umbrellas hung, and in a rather artistic way resembled a tree with huge drooping fruit!

Eva did produce some stunning works, one of which, The Piper, featuring the village of Dunboyne c. 1911, was chosen by the then Taoiseach, John Bruton, for his Christmas card to send to dignitaries around the world. She would have been delighted! Another of her works, “Ceilidh at Dunboyne’, dating from c. 1910, was included in the A Time and Place. Two Centuries of Irish Social Life exhibition in the National Gallery of Ireland in 2006. 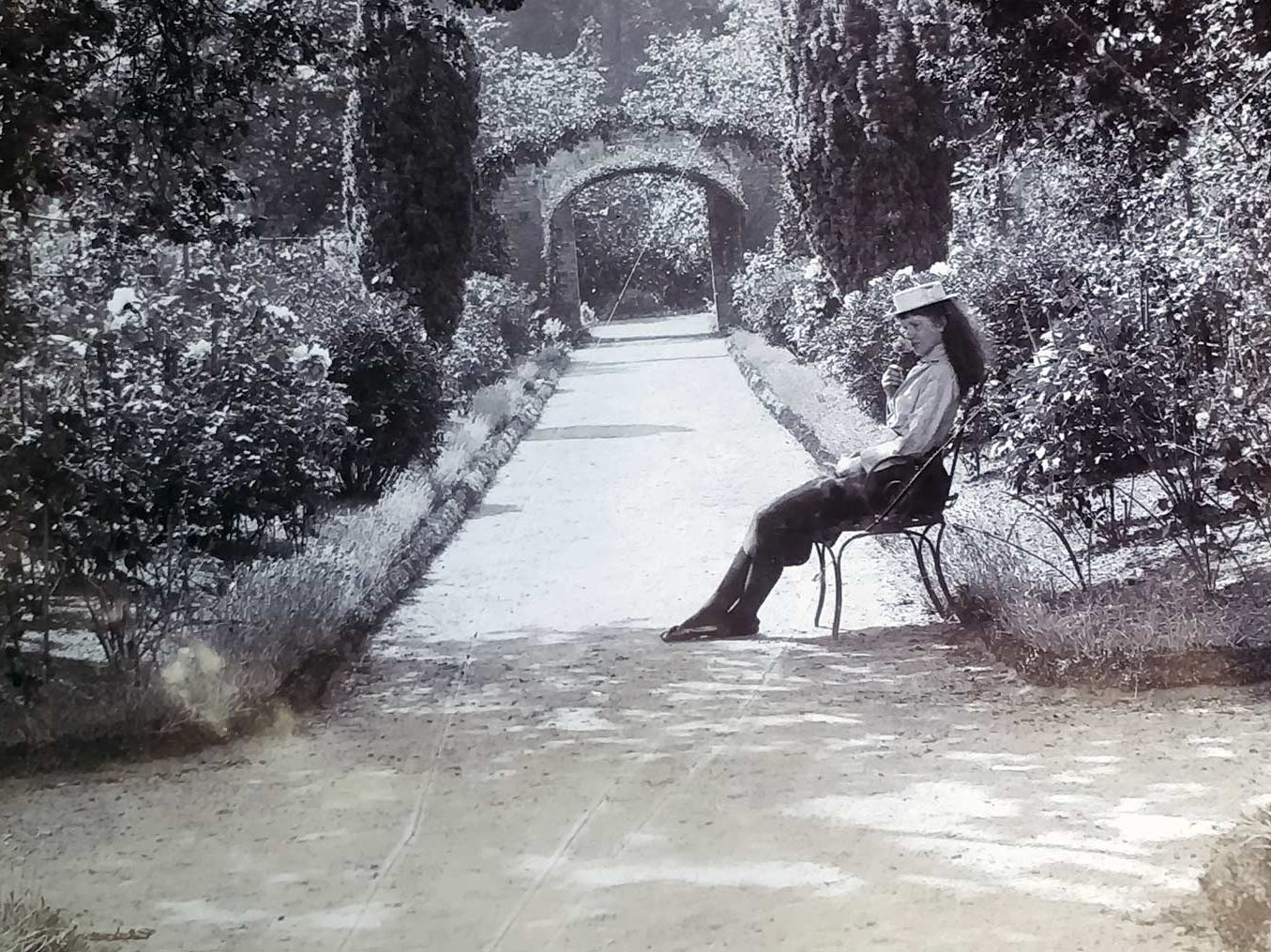 Letitia Marion Hamilton (1878-1964) was a talented and prolific landscape artist who, like her sister, studied under Open in the DMSA. Compared to Eva, she remained less influenced by him and more by the works of European artists that she saw during her time abroad. An inveterate traveller, she made trips to France, Belgium and Holland before the war in Europe curtailed these visits. During WWI she volunteered as a nurse but, in reality, seemed to spend most of the time rolling bandages in the Irish War Hospital Supply Depot which was located in Moore Abbey, Monastervin which had been converted into a recuperation centre for wounded soldiers. The family lived in one of the estate houses in the town where Letitia painted scenes of the town square, nearby Portarlington and the area of bog in between.

With the cessation of hostilities, Letitia’s travels recommenced with trips abroad, often accompanied by Eva. During the 1920s, she travelled widely in France, Italy and Yugoslavia. She visited Venice for the first time in the autumn of 1923 and during the 1930s made regular visits to the city and northern Italian lakes. Fascinated by the interplay of light on the buildings and water, this area was to provide the subject matter for numerous paintings. Many of these featured the Venetian canals with their bridges, lined by closely packed buildings. Using a brightly coloured palette to create atmosphere, these were amongst the most original and successful canvases she produced.

Frustratingly, it is difficult to date her work exactly as she left her pictures undated and returned to the same subject matter on a number of occasions, often using the same title. Letitia signed her early paintings ‘MH’ (she was known as May by her family), reverting to the more familiar ‘LMH’ from about 1920 onwards.

With the onset of war again in Europe in 1939, Letitia switched her attention to her home country and produced a large body of work depicting the local landscapes and seascapes. Frequent visits to Roundstone and Glengarriff gave rise to a series of paintings of the area. More muted in tone, these often featured the rugged landscape and big skies of the locality. With an increasing use of impasto (layering of paint on the canvas), colour was applied in a broad sweep using a palette knife.

With horses central to the Hamilton family way of life, it was inevitable that equestrian scenes would form an important part of Letitia’ work. Scenes of riders and packs of hounds from the local hunts were prominent as were depictions of local fairs and race meetings. It was for one of these that Letitia won the bronze medal in the paintings section in the Sport in Art competition of the XIVth Olympiad (Olympics) in 1948 in London. It featured an image of the pre-race parade of horses at the Meath point-to-point meeting. In fact, she became the last person to win such an award as Art was subsequently excluded from Olympic ‘sports’. (The current whereabouts of the painting, medal and diploma are unknown).

Letitia was a serial exhibitor – no sooner was one exhibition completed, then she was out painting for the next one. She was a founding member of the Society of Dublin Painters in 1920, along with Jack Butler Yeats, Paul Henry and Mary Swanzy. This provided a forum for the exhibition of more impressionist and avant-garde works away from the more conservative environment of the Royal Hibernian Academy (RHA). She remained a member throughout its existence; Eva became President in 1948. She did also become a member of the RHA, one of its earliest female members, becoming an Associate Member in 1934 and full member in 1944. Only missing two years, 1927 and 1931, Letitia exhibited in the annual exhibition in the RHA every year from 1909 to 1964. Her crowning glory was a series of exhibitions in the Dawson Gallery in Dublin from 1958 to 1963. The last one was held the year before her death. These sell-out shows confirmed her popularity with the buying public. Recently, her painting of A Fair Day, Clifden was included in the ‘Birth of Modernism in Irish Art’ exhibition in Dublin Castle.

During her final years, Letitia’s sight began to fail and she developed a slight tremor in her hand. Nevertheless, she continued to paint, concentrating on smaller canvases, often studies of beach scenes in Dublin and equestrian scenes of hunting and polo which she finished rapidly but still managed to retain a sense of movement and life. Following a fall in Woodville, she died in the Adelaide Hospital in Dublin on 9 August 1964, aged 86.

There has been a debate as to which of the sisters was the better artist but their differences in style and technique makes this difficult to assess. Letitia produced a significant body of work with her characteristic layering of paint on the canvas making it readily identifiable. Much of Eva’s early work was portraiture, a genre in which she excelled but this was an arena that Letitia seldom ventured in to. What is certain was they both blazed a trail for women artists in Ireland at a time when it was dominated by their male counterparts such as Sean Keating, Paul Henry and Jack Yeats. Eva and Letitia’s images of pre-war Europe and scenes from Irish towns and villages preserve a way of life that has now vanished for ever.

Membership
We use cookies on our website to give you the most relevant experience by remembering your preferences and repeat visits. By clicking “Accept”, you consent to the use of ALL the cookies. However you may visit Cookie Settings to provide a controlled consent.
Cookie settingsACCEPT
Manage consent

This website uses cookies to improve your experience while you navigate through the website. Out of these cookies, the cookies that are categorized as necessary are stored on your browser as they are essential for the working of basic functionalities of the website. We also use third-party cookies that help us analyze and understand how you use this website. These cookies will be stored in your browser only with your consent. You also have the option to opt-out of these cookies. But opting out of some of these cookies may have an effect on your browsing experience.
Necessary Always Enabled
Necessary cookies are absolutely essential for the website to function properly. These cookies ensure basic functionalities and security features of the website, anonymously.
Functional
Functional cookies help to perform certain functionalities like sharing the content of the website on social media platforms, collect feedbacks, and other third-party features.
Performance
Performance cookies are used to understand and analyze the key performance indexes of the website which helps in delivering a better user experience for the visitors.
Analytics
Analytical cookies are used to understand how visitors interact with the website. These cookies help provide information on metrics the number of visitors, bounce rate, traffic source, etc.
Advertisement
Advertisement cookies are used to provide visitors with relevant ads and marketing campaigns. These cookies track visitors across websites and collect information to provide customized ads.
Others
Other uncategorized cookies are those that are being analyzed and have not been classified into a category as yet.
Save & Accept
Powered by